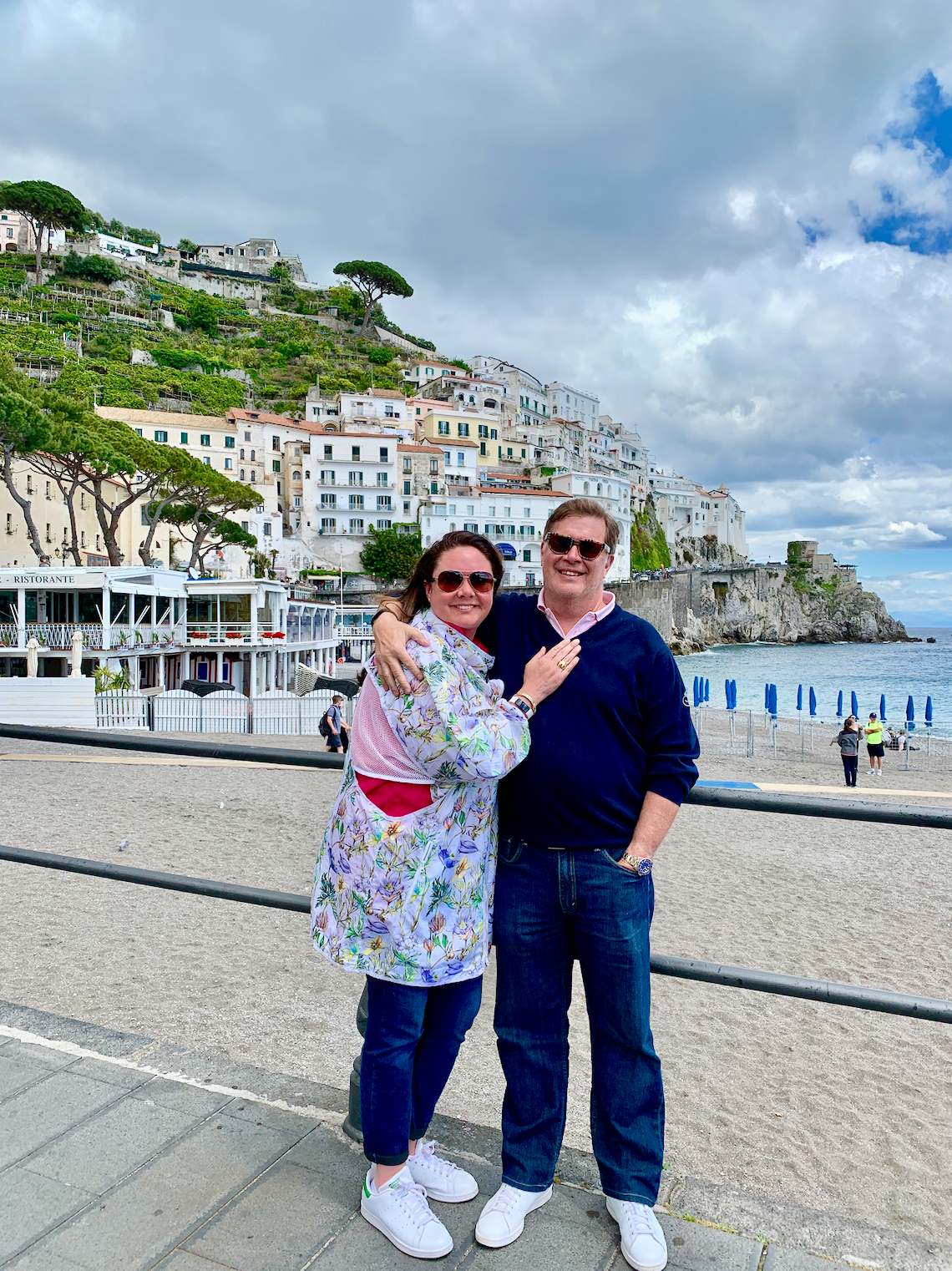 Spent the day in Almafi :-). Miles thought it was the most photogenic of all our stops. Very pretty and super walkable. Took the tender from the ship and we were right at the sights and shopping. Couldn’t have been easier! I like the walkable towns that we don’t have to fuss to hard to get to or around.

Amalfi is comprised of colorful costal scenery and rests at the foot of Monte Cerreto’s dramatic cliffs. According to today’s Currents (our daily Oceania publication specified to the day’s port and daily ship activities) it became a major holiday destination of the British aristocracy and upper class in the 1920’s and 30’s. You know I love any place I could see Lord and Lady Grantham visiting.

Currents also said the Amalfi coast, in general, is known for their lemons and also their famed Limoncello Liqueur. The Amalfi coast’s lemons are specifically called sfumato amalfitano and are at least double the size of a lemon you’d find at an Old Town market. Put your hands together like your praying and that’s how big I remember them being. They’re thick with a wrinkled skin and are sweet and juicy. We didn’t drink any Limoncello. Had to make sure we caught the last tender. lol. But I did buy a fun maxi dress with a lemon print to remember our day there.

I also read in Currents that Amalfi is also known for “bambagina” — a hand made think paper. I’m such a paper and pen lover — between cards and my bujo — I went and checked out a stationary shop. The paper was lovely and familiar. They export it to the States I just didn’t know that’s what it was. I got Miles his birthday card from the shop. The artist, Giuseppe Leone described the paper by saying, “there is a whole world that the Amalfi paper evokes and an artist who is sensitive to the suggestion of these places is aware that it is unique and exciting”.

After shopping around we sat at a local cafe to soak up some Amalfi cafe culture and people watch. While we were sitting at the cafe, a musical trio came and played along the sidewalk. They were actually very good. But the Italian fellows appeared a bit more aggressive then American street performers when it came to collecting money from folks that just happened to be in the area where they decided to play their music. It’s always a good idea to have small bills / coin for those situations.

The cafe we happened upon was next to something instagramable. There were tons of tourist snapping pics. So, of course, we checked out what the fuss was all about. The fountain I mentioned is on a hillside with a water element streaming and tiny little nativity figurines strode about. It reminded me of my grandma’s dime store nativity that I cherish — Grandma doesn’t decorate much for the holidays anymore.

The statue-fountain is not just comprised of Jesus, Mary, Joseph and the wise men. There is a whole village of folks displayed among the statue. It appeared so simplistic as far as construction but so interesting to look at the totality as well as individual elements.

Turns out it was a statue-fountain-nativity called De Cape ‘E Ciucci. From what I could put together ciucci in Italian means donkey. The donkeys would stop there and sip some water after carrying heavy loads from the hills above Amalfi. I think it’s sweet that it’s named after the donkeys and there are animals incorporated into the nativity — it’s actually believed St Francis of Assisi created the 1st nativity in the early 13th century!

We’re off to Rome for a few days tomorrow. We’ll visit the Vatican where Pope Francis — who named himself after the animal loving saint — currently reigns. We don’t have much time there so we’re planning on being super touristy. lol.

Tonight is our last night on the ship. Kinda sad. Was a wonderful experience! Seen so many places and we didn’t have to switch rooms lugging our overly packed bags to a bunch of different cities. We’re hooked on crusing!

Check out our last #stepsofjiles shot from the trip. Notice they didn’t replace the flowers. I guess they’ll put out a new gorgeous arrangement for the next set of cruisers. We learned of a couple that are going to stay on board for another two weeks and end-up in the United Kingdon. Miles said he coulda’ done that really easy. I coulda’ too! What a top notch vaca!

p.s. If you’re not already, please follow our adventures on Instagram! We get lots of positive feedback, and it makes us super happy to provide some inspiration to help others live their best life in their hometown and on their travels.