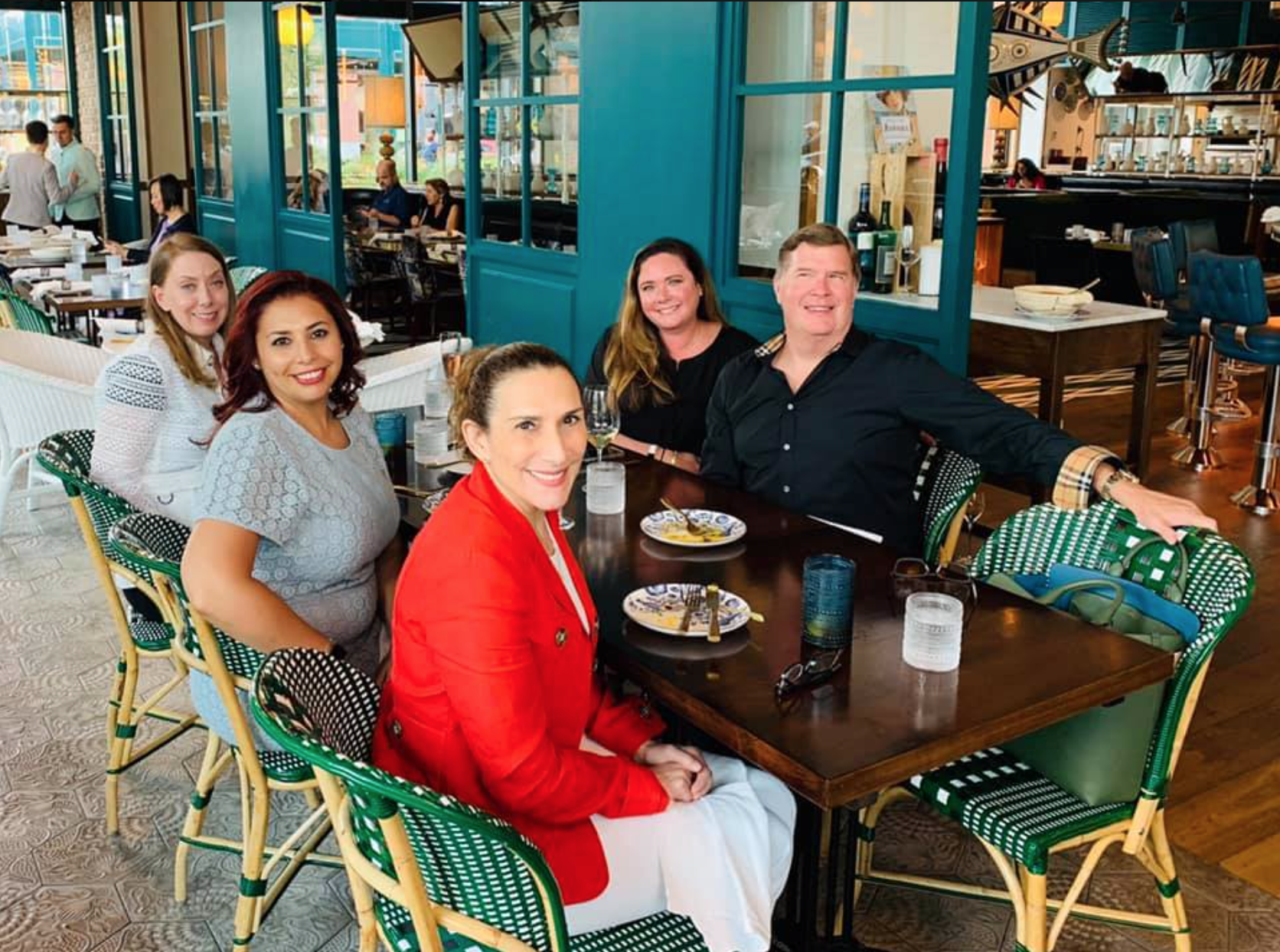 We had a great lunch with the crew from Burberry at Del Mar at the District Wharf (or as locals call it, the Wharf). The District Wharf is Washington DC’s shiny new two billion dollar development on the Potomac River. It’s a popular destination for boaters! It’s also accessible by the water taxi which links popular DC destinations like Old Town, the Wharf, and Georgetown.

We were a bit early so we were able to get one of the hostesses to take a picture of us and get some inside scoop into the menu.

Esquire called Del Mar, Fabio and Maria Trabocchi’s “love letter to Spain” and named it one of the 20 best new restaurants in America. Washington Post food critic Tom Sietsema said, “not even in Spain have I encountered a dining room as opulent yet breezy as this one, another success story from Fabio Trabocchi, best known for his Italian gifts to the city — but none more seductive than Del Mar.”

This place is grand and delicious. Great attention to detail from the plating to the decor. And, seriously, I’m going to purchase the same water glasses for our townhouse. And probably some gold flatware too.

Yasmine suggested we lunch at Del Mar. She personally knows Maria Trabocchi and the restauranteur’s reputation. Maria and her husband, Fabio Trabocchi have very successful restaurants in the United States and Europe. In the DC area, in addition to Del Mar, the dynamic Trabocchi duo have Sfogliner (neighborhood pasta house), Fiola Mare (elegant Italian seafood), and their fine dining flagship restaurant, Fiola, which is Michelin starred.

Fabio is actually from Majorca Spain. Miles and I were just were a couple months ago. Every time we docked in Spain I’d tell Miles I felt like we should get some tapas. But we were never hungry after the magnificent Oceania breakfasts. So it was great to get a do-over by visiting Del Mar — they specializes in Spanish Coastal Cuisine.

We were too busy gabbing and I forgot to take pictures of the appetizers. It was a great lunch filled with happiness, laughter, and interesting conversation. You wouldn’t have known it was the first time the five of us socialized outside of the store.

It’s so much fun to share tapas. I feel like sharing food acts as a way to relax the table — especially if people don’t really know each other. We ordered three tapas in total and all were very good.

We shared Pan con Tomate with Jamón Serrano (Catalan crisp bread, tomatoes, garlic, drizzled with extra virgin olive oil). Here’s a fun little tidbit, the bread gets flown in a few times a week. So we had to order that.

The tapas were very good (as was all the food). I thought the imported bread would would be my fav but it was the shrimp.

The hostess told us which paella was the award winning one. The menu told us that “paellas is a Valencian dish from the 1800s, Paella is a pillar of Spanish gastronomy, part of the Spanish soul and its people. All paella [is] made with Bomba rice and served with garlic alioli.”

You can order the paella for 2-4 people or 4-6. It was dramatically presented to the table in the traditional paella pan. But then the server took it off to the side to plate their entrees.

While their Paella was being plated a waiter brought my fish fork and knife. This pic gives you a better look at the flatware I thought was go great.

Yasmine and I both ordered the the 6 oz Spanish Branzino which is served with a Romesco sauce. I ate bites with the sauce and without. It was amazing either way. And how adorbs is the presentation on the glass fish plate.

The company and food were great! We talked. We laughed. And we indulged in some pretty tasty award winning food at Del Mar at the Wharf.

Post script, if you will . . .When categorizing posts, if we can get to a place by the Potomac Riverboat Company’s Water Taxi which so many Old Towners use daily, I consider it part of the Old Town experience and our unique lifestyle.