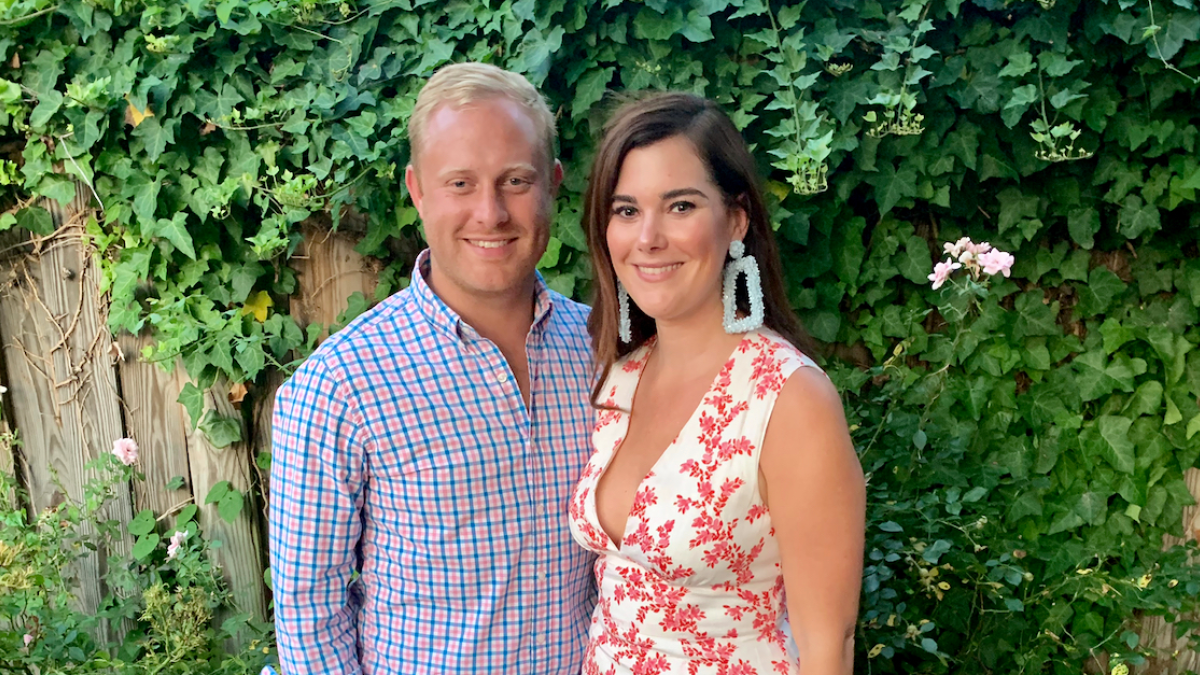 Last Friday night, Miles and I attended our first Honey Do shower. The happy couple getting married this September is Lauren Schab and Michael Catts. Michael is the son of our good friends, Bruce and Lauren Catts, whose boat, Sea’s the Day, is where we tied the knot.

Did you catch the two Laurens in that previous paragraph? That’s right both mother and daughter-in-law are named Lauren. But, wait, there’s more. I’ll get to it in a bit. Now, back to the party . . .

Miles and I had three engagement parties. I never even thought of a having a shower — I didn’t want to go through the process of people staring at me while opening gifts. But this clever Honey Do shower solved that by displaying unwrapped gifts. (Plus, it’s better for the environment to not use wrapping paper.)

Check out how cute the invitation was . . .

Even though Lauren and Micheal were registered at Zola. Miles had it on his brain that we were giving them a plunger. . . and money. I could work with that, I thought. So here’s what we came up with: a plunger with a bow (Miles really wanted the bow). Wrapped with money. And we used our card as a sign that said:

Congratulations on taking the big plunge . . .

Here’s the bride-to-be holding our plunger. Lots of folks were joking that this would be the last time it would ever be in her hands 🙂 !!!

AND I’m very proud to say that the plunger was such a big hit that mother-in-law Lauren walked it around the party.

The party had a beachy vibe. Upscale beachy. Jimmy Buffet tunes drifted around the back patio. Navy and white check table cloths adorned the tables along with sunflowers and other bold and colorful delights. And twinkle lights on a tree always promises lovely ambience.

The Honey Do shower was held at the home of local socialites Mary Frances and Jim Wood.

Old Town Hosts and parents of the groom, Lauren and Bruce Catts

One of our engagement parties was actually hosted by the same dynamic duo — the Woods and the Catts. And much of the menu was the same so that that made it particularly special for me and Miles. (Be on the lookout for recipes from the party coming soon! These couples can cook!)

Food was set-up in the dining room, but this particular summer night cooperated and everyone could celebrate outside.

And finally, here’s some sweet family photos from the party:

Remember I told you that there was there’s more, I’ll tell ya after the family photos . . .

James and Lynn Schab with Lauren and Micheal

love the candid moments in between shots

Remember I said there was more I’d get to after the family photos. Well, I’ll let these last photos illustrate it . . .

Here’s two more family photos from the party. Catts brothers, Matthew and Michael, getting ready to pose with their stunning and stylish fiancés.

Guess what Matthew’s fiancés name is?

Yep. I swear to you. It’s Lauren. I’m not making this up.

All the women in the Catts fam are about to be Lauren’s. What are the odds? Well, one thing we know for sure, we’re happy for the happy couples. Best wishes Lauren, Lauren, and Lauren. And Congrats to your men.