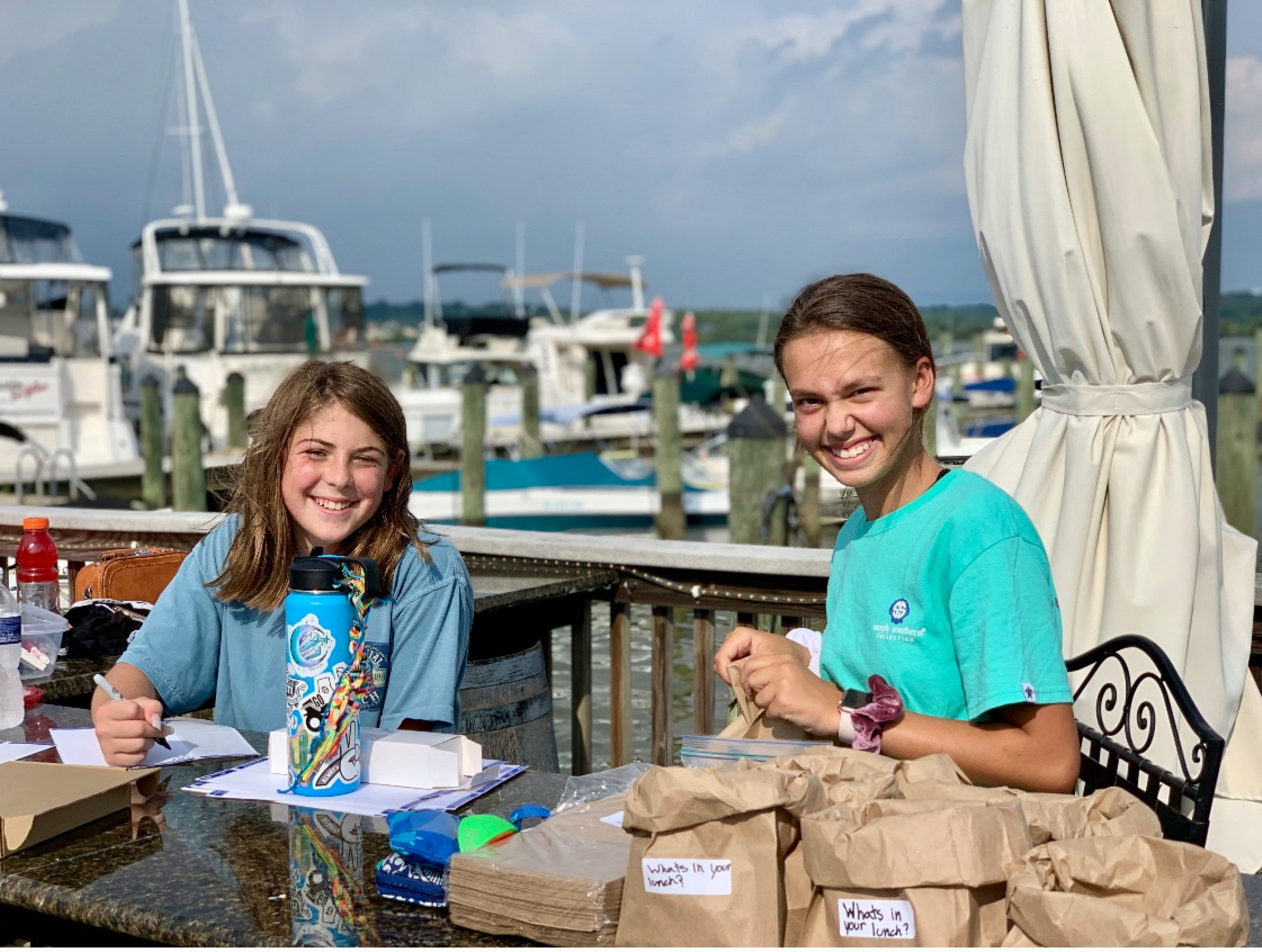 School Supply time makes me acutely aware that summer is almost over. It’s kinda bittersweet. I LOVE LOVE LOVE the fall. But summer memories are great. Family vacations. Road trips. Boating on the Potomac. Jumpin’ in the river. Pickin’ crabs on the docks. Pool Parties. And barbecues.

Miles and I thought maybe we should hurry-up and have a barbecue because Octoberfest is just around the corner. And I’ve been wanting to make Ina’s BBQ sauce for three years.

Then we wondered if people would bring school supplies to our barbecue? Maybe, we thought, we could do this to support the Old Dominion Boat Club’s (ODBC) School Supply Drive for the local Alexandria children in need.

We thought maybe if we offered some barbecue to folks that maybe they’d bring some school supples. And they did!

Let me tell you a little about our Backpacks & BBQ — A School Supply Drive on the Docks . . .

Our thought was if folks brought school supplies we’d feed ‘um — while it lasted. Boat Club culture is such that couples will bring some food to share plus what they want to drink. We asked in the invitation that it be BYOB but to please not bring any food. We wanted people to focus their energy and money on the school supplies.

We had a little photo booth. And some football and pom-pom props. And not one dang picture on my iPhone of it!

I wanted the decorations to obviously be nice to look at but also thoughtful and practical. The goal of the BBQ was to get as many donations as we could while having a good time. So I went with a “back to school-ish” theme and utilized school supplies to maximize donations.

Ava and Grace are ODBC kiddos and just the darn sweetest girls. And they were a huge help to us with the decorations! (They also come running to me when they see me at the club with their arms wide open for a hug and if I’m lucky I get an enthusiastic “Aunt Jenjen” in the greeting.)

They made notes for the homemade Chex Party Mix that they like to see in their own lunchboxes. We had the party mix in snack size baggies with notes that read things like: Super! Ace that test! You’re great! I love you! We then rolled down lunch bags and wrote “What’s in your lunch?” on each bag. Ultimately, the party mix became a part of the tablescapes . . . .

In the donation area we had a boat cart for the donations. We had a life-size ruler hanging above and the girls made a sign that said “You rule! Thank you for your donations.”

Ava and Grace were such a huge help with the decorations we invited them to go with us to drop off the donations and get an ice cream!

During Backpacks & BBQ the girls were off on a boat hanging-out but Grace’s grill-master daddy was on the docks. Dwayne cooked the BBQ drumsticks, corn on the cob, and hotdogs.

We had grilled BBQ chicken. Dilly Deviled Eggs. BBQ pulled pork. Coleslaw. And Pioneer Contessa Baked Beans (that’s based off the Pioneer Woman’s Baked Beans with the Barefoot Contessa’s barbecue sauce mixed in — O.M.G.). We got lots of compliments on the food (recipes coming soon).

ODBC member, Suzanne Willet, thought the Backpacks & BBQ was a great idea. And she said she had so much fun shopping for supplies. The Willett’s are the parents of two, now adult, boys. Suzanne said it was the first time she bought a backpack for a girl. It was pink. And she just loved buying it!

Kalie and Tim Brown, ODBC wait-listers, local immigration attorneys, and parents of two adorable little ones, decided to use Backpacks & BBQ as a teachable moment for their 5 year old son, William. Kalie said, “Amazon kept showing up with supplies. Paint. Glue. Scissors. Crayons. William [understandably] thought they were for him. We explained to him that not everyone has the money to buy schools supples and we were giving them to children who needed them so they can have a good school year too. He thought it was really nice . . . then he went to play with Superman.” lol.

In one week the Old Dominion Boat Club collected thousands of dollars worth of school supplies for local Alexandria kids in need.

It makes me happy that our little Backpacks & BBQ helped out. In fact, ODBC members were so generous our car was packed floor to ceiling with the donations.

We didn’t have any room for our “nieces.” The car was actually so packed we didn’t know if there was going to be room for me! But don’t worry, we’re still gonna get Ava and Grace some ice cream!